Day 3. Had a rough night. Couldn't really sleep well due to a crazy toothache but the time was not wasted with me tossing around in bed hoping for a tooth fairy to put her magic dust on my pain-in-the-ass tooth. I did EIGRP labs from Narbik's workbook :-). Not all of them though. If I did that, I'll probably be a zombie in today's class and today's class is no joke people. Why? Two reasons.

BGP and Multicast (we did 1/2 of Multicast today with a really cool RPF check lab which I will talk a little later). Now a lot of people seem to fear multicast (of course not forgetting the people who fears BGP) and I am no different. I was also feeling a little tired today and I feared that this would get in my way of paying full attention to Narbik's class. BGP after all is the Internet protocol as some engineers would say and that's a point taken with the abundance of options it has while multicast ... well let's put this way. I have a unicast mindset at the moment ;-). Hence these two topics required absolute concentration! I am not saying the other topics does not need concentration but personally for me, I knew I had to give it more than 'more' of my concentration to understand what Narbik will be teaching.

Narbik came in a little late today looking rather tired so both he and I went to get a dose of 'Red Bull' (an energy drink) in our veins to try and really focus. He focusing on the class and me focusing on listening to what he has to teach. After 10-15 mins, the battle begins ...

Narbik started the BGP class and like every other sections in his bootcamp, he will first list out what he will be teaching us today. Topics such as BGP optimization, MSS, Hold Queue In, PMTU, scan-time, dampening, conditional advertisement and a host of others including BGP states, aggregation and attributes are also covered. Now I found out one interesting point today. Typically people who have problems with BGP is not with BGP as a whole but a very specific topic and that's BGP aggregation. Why? Attend the bootcamp and see how Narbik tears your brains apart with his labs on this topic. Narbik will carefully explains to you what is aggregation and what are the commands in the IOS to manipulate this topic. Commands such as 'aggregate -add xx summary-only AS-SET advertise-map TST' is an example. You will be TESTED to the limit :-).

One more thing to note about Narbik. He LOVES to use TST (meaning 'test' for short) in most of his configuration work like access-lists, policy maps, route maps, prefix-lists, etc. So if you see a colleague or friend or even a stranger doing the same thing, it's a possibility that he or she attended Narbik's bootcamp and got the 'TST' virus. I know I did.

Apart from teaching us BGP, Narbik taught us that we cannot assume we know the meaning of certain words in our CCIE studies. For example, virtual routing and forwarding actually means routing table. It has NOTHING to do with an abstract route or a forwarded route (if you look up on virtual, routing and forward in an English dictionary, you'll know what I mean).

We did BGP for most of the day but of course again we had lunch in the afternoon to supplement our waning body batteries after it was being sucked dry by Narbik's labs. Come on guys/girls. Don't tell me you don't eat during bootcamps ;-). Narbik, Sai and Aung (two cool dudes from Myanmar) and I had Japanese food today at 'Oh Sushi! ' restaurant. Now for a little secret to share with you guys. Narbik can eat hot and spicy stuff and I don't mean your average hot and spicy. This dude can eat HOT and SPICY man. My impression of the 3xCCIE teacher has changed.

After lunch, we wrapped up BGP and on to one of the most common problematic topics that a lot of CCIE candidates fear. Multicast. Now I don't really like multicasting. Even when I studied for my CCNP, I was always complaining how hard is it to understand multicasting. Now after today's class even though Narbik only taught 1/2 of his multicast class (the other 1/2 will be in Day 4), I begin to enjoy multicast. Why? Simple. The way Narbik explains how multicast works with his chalk talk and proof that what he writes can be done in the right and correct way on the IOS are the main reasons.

He of course taught us stuff on multicast like the delivery method but the highlight of the day was a RPF lab. Narbik taught us that RPF check can be done in very few steps (2-3 commmands/steps). He proceeds to get us to do a simple topology (which for some strange reason mine didn't work probably due to a typo error which is usually the fault of mine) and he guided us on every single step to locate the RPF. Genius I tell you! Pure genius! This is the kind of style I like. Teacher guidance for a really tough exercise. I will not post the RPF lab topology here nor will I talk more about it but I can tell you this. If you spend your money on Narbik's bootcamp, this RPF lab will be one of the many reasons that you will say it's money well spent. I don't usually praise an exercise/lab scenario but I give full credits to this RPF lab for making me know how weak I am in multicasting :-).

Narbik's quote for the day which I will always remember. "Respect your boundaries". "Don't act over your work limit". "There is a start and end to one's work". What this means is that we must know when a network engineer's work begin and when it ends. A network engineer does not need to know how BGP was programmed into the IOS but he has to know how to manipulate BGP and makes it work the way he wants it to.

And for those interested, although it's not really new since it's Day 3 now but from Day 1 itself, Narbik often says "My grandmother does this all the time/everyday" and "This is ridiculously easy" :-).

We ended up early today (by Narbik's standard) at around 2015hrs since Narbik, Yap, Christina and I will be having dinner later tonight at a Japanese restaurant called Ninja Jones. Yeah Narbik ate Japanese food a lot (thanks to me always fooling him into taking Japanese food). He's trying to be one of those foreign samurais with Cisco blades (check the pics later in this post if you don't believe).

After a filling dinner with some serious QoS discussion and how Narbik got to find out several stuff that he did not know before, I went back home, spoke very little to my wife (since I was dead tired), took a bath and the moment my head touched the bed, it was dream time for me no thanks to BGP and 1/2 of Multicast.

Tomorrow will be a BIG and tiring day. The topic that I disliked the most QoS will be next. Bring it on Narbik! Show me who's the boss!!! 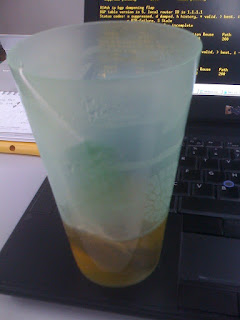 Tea is my energy booster throughout this bootcamp. I don't know why but it doesn't makes me sleepy or tired even though I am supposed to feel it that way ;-). 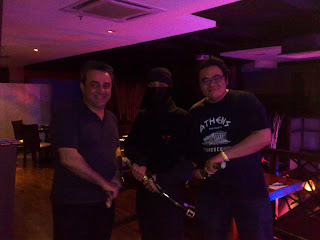 You see that secret agent 007 dude there. I have absolutely no idea how he got associated with a Ninja and the Ninja's master ;-). 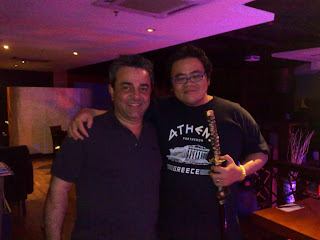 A great night. Great dinner. And best of all, not only Narbik is a teacher to me but a very good friend. He does not bite folks only if you give him a dose of three glasses of scottish whiskey.
Posted by Nickelby at 12:08 AM

Hi Mate! I'm pursuing CCIE and I would like to use GNS3 for my practice labs simply because of the GUI. Could you give me the specs of your laptop as I'm about to purchase one? I'd like to make sure that the new laptop will work as i travel to the bootcamp. I'm attending the micronics bootcamp in a month, and I wanted to ask...do they give u the .net file to load on gns3? Do you use gns3 or dynamips? Thanks for your help in advance. You can also email me directly at nilesita@gmail.com.

My laptop is a Intel Core 2 Duo P9500 at 2.53GHz with 4GB RAM. Due to the nature of Windows memory management, I run this machine using primarily Linux.

Narbik does not give us the .net file but it shouldn't be that difficult to create one based on his topology. I use GNS3 ... I am a sucker for point and click kind of interfaces. Granted GNS3 eats a little more memory than Dynamips alone (have you seen how Windows eats memory compared to DOS?) but once you sort that out, it's much easier to maintain and see.

Enjoy your bootcamp with Narbik! Say hi to him for me :-)

Thanks for the prompt reply. Do you mind sharing your GNS3 .net file?
thanks, in advance, niles

BTW, congrats on your DIGITS!

You will have mail in 24 hours :-) but this .net file does not come from me. It comes from Matt Hill so credits to him. My .net file does not follow any topology to be honest since I use it primarily to test any technologies within the CCIE blueprint.