Day 2. What did we do in Day 2? We did hell lots of stuff on OSPF and a little later at around nearly 1900hrs we did EIGRP. For those who are unaware, Narbik's bootcamp starts at 0900hrs and it ALWAYS finishes after 1900hrs. On the first day, we finished a little after 2100hrs but today we left the battlefield at around 1945hrs.

Narbik highlighted and teached a lot on OSPF. We nailed pretty much there is know about OSPF including the LSA types, network types, database overloaded protection, authentication (a simple topic to understand BUT also a very simple topic to be overconfident and make a lot of mistakes) and a few other topics which is lapsing from my memory now but they do include one of the most difficult if not the most difficult topic on OSPF, filtering. Filtering in OSPF or to any other protocol to that matter is not a joke. Look at my notes below. That, people, is ONE ... let me repeat that ONE of the many tutorials that Narbik has taught us today. I chose this particular notes to be screenshot because this to me, is one of the hardest scenarios I came across my life for OSPF stuff. 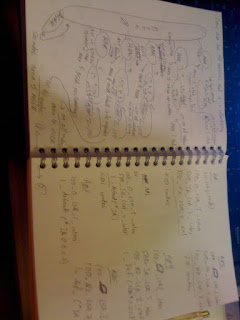 This is the notes I did on one of the OSPF filtering out of Narbik's teachings today. You need to forgive me for such a crappy image and it's not even in the right position. Blame the iPhone's lame camera and Google for repositioning my image when it was in landscape mode originally.

Now one VERY important thing that I learnt from Narbik today. His theory that for OSPF, from a non-0 to a 0 area, the flood process is done. From a 0 area to a non-0 area, a distribution process is done. Now this is INTERNAL to the OSPF process ONLY. He of course proved this via a OSPF topology. I am not going to spoilt it for you. Come to his bootcamp and you will know what I am talking about :-). Make sure you ask him about this. It's really incredible I tell you on how he found these things out.

By the way, OSPF lecture was not done the whole morning and afternoon. We had lunch in between for goodness sake :-). Today however, I had an upset stomach so I didn't really had much to eat. Lesson of the day. DO NOT I repeat DO NOT take milk if you are weak to lactose. Falsely beliving you can handle a little milk is not the right way to think if you plan to sit in a whole-day class or event. I had to rush back to the hotel during lunch and after doing what I need to do, I was back to the training centre to continue listening to Narbik's teachings on OSPF for the afternoon.

After massaging our brains as Narbik says, we did OSPF labs from 1600hrs to 1800hrs (one thing I learn about Narbik. He always gives us extra time for our labs and NEVER starts so far at 1800hrs for his next presentation but instead 15-45 mins after 1800hrs ;-)).

EIGRP time. Now I think you guys will probably think you know EIGRP inside out. I thought I did for sure and boy was I wrong! I was humbled beyond words and after listening to a 45 minutes presentation of EIGRP by Narbik which again includes an intro to EIGRP (or summary as he likes to calls it), authentication (which is a lot more easier to configure than OSPF), vector metric, composite metric, metric calculation, stub configuration and of course the dreaded EIGRP filtering which again proved to be the most difficult topic in EIGRP. Narbik throws in the occasional joke (it may be true by the way) that little men with big green ears who works for Cisco tried to confuse the world by introducing a ridicuously stupid (that's what I feel not what Narbik says) formula for the metric calculation. But I also found out that this metric calculation will take into place ONLY if the value in K5 is not 0. Trying to be funny eh Cisco? You are NOT funny ...

Narbik finished a little earlier today. He was rather reluctant to let us off early but we finished up for the day anyway :-). Today was pretty intensive. Narbik with his witty humour had us laughing at times and this was really good to keep up the tempo and energy for us to not fall asleep or feel sleepy in his class. Now, I am going to stress this. Narbik is NOT boring. He is way too far from being a boring person. But after going hours and hours of teachings and labs, it is very easy to feel tired and thus sleepy. This could apply to the CCIE lab in my humble opinion and Narbik has a solution for that. Today Narbik's famous saying was "you should take wasabi before the CCIE lab". Hehe ... you would have lightning fingers if you did that and you will finish the lab in less than an hour ;-).

Tomorrow will be a killer for me since we are going to tackle the almighty BGP and no it DOES NOT stand for Boys Got Penises. BGP although not my weakest subject, it is still however one of the topics in networking that I continue to struggle with. Working with BGP in a very minimal amount of experience does not help me either hence tomorrow I plan to have a theoritical approach towards BGP and then lab it further using GNS3 or doing Narbik's BGP labs from home (like I will be doing for the EIGRP labs tonight after this post from my hotel room).

That's not it. There's still one of the most dreaded topics that a lot of people seems to be having problems with. Multicast. There ... shiver in fear my friends :-). As with BGP, I will probably do the same with multicast. Take a theoritical approach then lab on it further.

Day 2 ends a little tougher than Day 1 and I believe Day 3 which is tomorrow will leave me exhausted and crying for more mental strength if I am to believe what I will be facing tomorrow. I'll end this post with a picture of how Narbik writes on the whiteboard and a little comment on that picture. 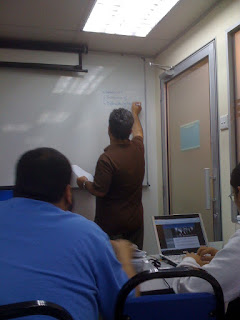 Narbik ALWAYS lists out the sub topics of the major topic he will be teaching us. In this case, it's EIGRP. And again no ... EIGRP does not stand for Excellent In Getting Racoons' Penises.
Posted by Nickelby at 11:37 PM

Are you sure EIGRP doesn't stand for excellent in getting racoons penisis? Because I have been reading Jeff Doyle and Wendal Odom and they disagree.

LOL why is someone looking at Mike Down's blog while Narbik is writing on the whiteboard!!!!!!!!!