First day :-). Went to TrainPro (http://www.trainpro.com.my) at about 0845hrs (GMT +8 since the bootcamp is in Kuala Lumpur, Malaysia). Narbik wasn't here yet but Yap, the ever-friendly owner of TrainPro told me that Narbik will be here before 0900hrs ;-). Set up my work laptop (trying not to go through the abundance of e-mails that I have missed as I was in Athens, Greece the previous work for project management work). As I was surfing the net for awhile ...

POOF! Narbik with his magician hat appeared out of nowhere and started to greet us in a warm smile. He asked us to give us a brief introduction of ourselves, where are we from, what are our preparations for his bootcamp, our lab dates if any, where we heard of his bootcamp and the occasional one or two jokes that came in between. By the way, his grandmother still has two CCIEs for those who wonder and is probably working hard to get her CCDE ;-).

Ok serious stuff now. Narbik started with telling us he will NOT use a projector. He instead will use a whiteboard utilizing the old school-style of 'chalk talk'. He emphasizes that this is the most efficient way of getting information into a person and I totally agree. Projector slides make me sleepy to be honest hence this is really a refreshing idea for me. Narbik also says that he teaches, he does not lecture and to me this is an important fact as he with regards to this, he stressed that we are all network engineers, we would be bored with the theoritical stuff and instead would love to see something practical. Don't we all feel like that? ;-)

Narbik gave us the laydown on the schedule for the week. We will be covering switching and frame-relay on day 1 with the usual labbing on some times of the day. OSPF and EIGRP will come on day 2. Day 3 will the one of the most intense with BGP taking the whole day. Day 4 will cover multicasting and QoS and finally Day 5 we would be spending it on RIPv2 and probably he will end it up with some lab strategies. We have about 15 participants and three of them will be taking their CCIE exams next month (mobile lab in Singapore).

For today (or yesterday since I am typing this in the morning of Day 2), Narbik gotten us to do lab work in the morning and after lunch he will teach us about switching from the security aspect (QoS will be on Day 4). He expects us to know basic switching and with that, he will not be teaching stuff such as "What is a VLAN", "What is VTP", "How do you create VLANs" and other basic stuff like that. Instead, he will be concentrating more on improving and strengthening our core knowledge in switching and to add "007" tricks of the trade as he called it to our arsenal of weapons when we face the CCIE exam in the future.

I had the pleasure of having lunch with Narbik. We ate Japanese food at Sushi King and we talked about stuff such as the economic situation in Malaysia, salary range in Malaysia, etc. We also talked about the CCIE market in Malaysia and we talked about Emannuel Conde (dude when are you coming to Malaysia to do a talk on CCIE recruitment? ;-)), Ethan Banks, Josh Atterbury, Darby Weaver, Arden Packeer, Lessaid, Blindhog (the other Josh ;-)) and all of you other people who have been guiding and walking with me on this yet-to-end journey (don't flame me if I didn't put your names here. I was writing this out of pure memory which Narbik nearly killed last night). Narbik insisted that he payed for lunch and we made a deal that I will treat him when I reattend his planned R&S bootcamp again in October 2009 (I might attempt the lab before then but who knows ;-)).

After lunch, Narbik started teaching on the switching class. Narbik gave his very famous quote today "IOS DOES NOT LIE" while proving a few proof of concepts on how this applies when we configure stuff. Narbik also encourages us by telling us even if we fail the test the first time, at least we know how it feels. He told us that it was easy to misintepret questions with him failing the first time as well. He also told us that he took the CCIE because he was told that he has to be a CCIE in order to teach CCIE courses (he still grins at this). Narbik ended today's class telling us we will be CCIEs IF we really want to be and even if we are not CCIEs or don't plan to take the CCIE class, we will be better engineers by understanding the technologies within the CCIE blueprint.

After this, I went home, talked a little with my wife and then I was snoring on the bed (of course I took a shower before then). Onwards to Day 2. Bring it on Narbik!!!

By the way, we are already using his Advanced CCIE Routing & Switching Workbook 2.0 for this bootcamp. Narbik also gave us a sneak preview of his upcoming and updated materials. He will not be touching the CCIE R&S 4.0 blueprint at this point since it is still 4-5 months away (besides only MPLS and layer 3 VPN is added to the blueprint). He prefers us to understand and dig into 3.0 and not worry about 4.0 just yet.

I will be adding pictures when I complete this bootcamp. That's just because I prefer not to pay RM 60/day for Internet access at the hotel I am staying (Cititel-RM 225/night).

Update: Some pictures while I was taking a break during lunch to update this post. 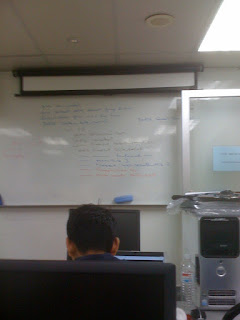 This is the class I was in. Look at the whiteboard. All Narbik's work :-). There are NO projectors. You can attend his class if you don't believe it. 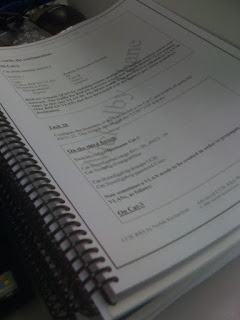 My personal copy of Narbik's workbooks. It has my name on it as a watermark. This is one of those rare cases where people actually spell my name correctly. 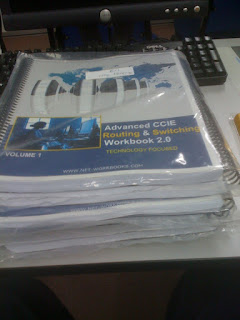 These are the workbooks in its full glory. Imagine when a person walks into Narbik's camp thinking that it's going to be easy to attend his class with a few labs to do and that's it. Boy ... are they going to be surprised with the amount of depth and information they have to master in Narbik's workbooks. 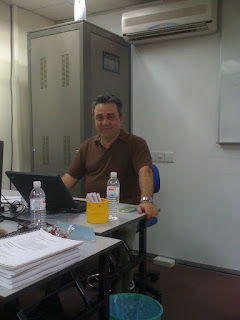 And here's the man himself, secret agent 007 Narbik Kocharians :-). I got him to pose like this believing that he was going to be nominated for the Grammy Awards 2009 (but little does he know he is being tricked).
Posted by Nickelby at 8:36 AM

Thanks for blogging your bootcamp experience, it is giving me a good idea what to expect, I am attending the August Class in California.

-Good luck on your lab exam!