A CCIE Flyer Exclusive
Today was a real busy day for me. I drove to visit with Narbik at one of his CCIE Boot Camps he was teaching in Herndon, VA. Since I was driving so far to see him I asked our mutual friend Scott Morris to join us for lunch. I am amazed at how the fifteen students in Narbik’s class responded to Scott dropping by to say hello. He is still held in awe by many neophyte CCIEs and some well established CCIEs around the world. Both Scott and Narbik have paid their dues as CCIE trainers and mentors. Both have made their mark on the CCIE community by giving freely of their time to motivate, mentor and improve the arena as a whole. For me sitting with the two of them was a treat because I have known them both for so long and only at the CCIE party this past Cisco Live have I had the pleasure of their company together. 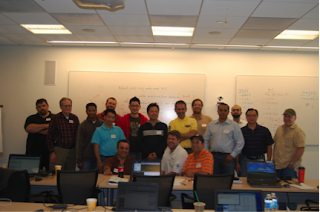 Big Plans
As we chatted we finalized some of the preliminary planning for a series of quarterly training events. Beginning in January I am proud to announce that the CCIE Flyer has brought both Narbik and Scott together for twelve day CCIE R&S Boot Camps. It’s true they will both conduct the same classes together splitting time on the podium. Both of these guys are responsible for motivating, training and guiding so many CCIEs along their journeys and careers that this partnering of giants is big news. Twelve days of career building, life changing, inspiring CCIE training like none ever offered before is being made available to you through the CCIE Flyer. 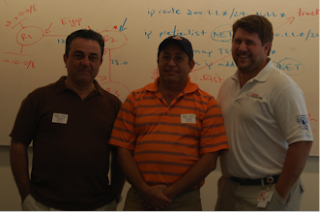 Where?
Bangalore is our first stop for the dynamic duo. January 2011 Narbik and Scott will hold the first of these historic twelve day sessions. This will be followed by Sydney, Australia in April, Milton Keynes, UK in July and finally Wilmington, Delaware in October. These twelve day comprehensive classes will equip aspiring CCIEs for success.


How Much?
You pay only, $4,500 for both Narbik and Scott, for twelve days of learning unavailable from any other source, anywhere in the world. There may be other twelve day or longer classes offered but none have these two dynamos taking the lead. You might pay more and you might now find lower priced venues, but the CCIE Flyer has both Narbik and Scott.


More!
You want more? Well how about the chance to pay nothing for the second attempt at the lab if you fail the first attempt after taking this class? Yup, both are Cisco 360 Learning trainers. So you get the added insurance of knowing you are joined on your journey by Cisco Systems approved trainers. The two weeks of training will also have a few surprises after class activities and career networking opportunities.
COME JOIN EMAN, NARBIK AND SCOTT FOR TWELVE DAYS OF LIFE ALTERING CAREER ENHANCING TRAINING!
For more information send an email to me eman@ccieflyer.com and I will be happy to share more details as the planning is finalized!
Posted by Nickelby at 8:21 PM

This blog is having the general information. Got a creative work and this is very different one.We have to develop our creativity mind.This blog helps for this. Thank you for this blog. This is very interesting and useful.
CCNA Training in Chennai